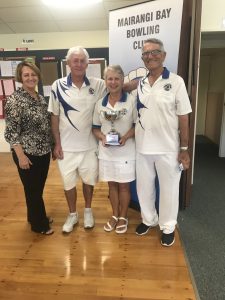 After 5 very competitive rounds ten teams battled it out for supremacy in the Finals of the Arena Living Mixed Triples. There were no 4 winners on the day & very few 3 winners. Winning & receiving the Arena Living Cup for the 2019/20 season was the team of Murray Radojkovich, Brian Rogers & Theresa Rogers  narrowly beating the team of Phill Chisholm, Jan Gledhill & Allan Langley. Both had 3 wins but Murray’s team came out ahead with more ends.

Rowena Tinone from Arena Living, accompanied by Janelle Willy was on hand to present the Arena Living Mixed Triples Cup & prize money. As always we are very grateful for the sponsorship & support given to the Club by Arena Living & look forward to our on going relationship.

In the Plate Event winners on the day were Garry Banks with Grant Keates & Adele Ineson. They had 3 1/2 wins. In second place with 3 wins were Tony Trent, Sandra Coombe & Ron Horne.

Although the skies looked threatening at times most people appreciated the slightly cooler temperature & all enjoyed the morning tea kindly supplied by Arena Living.