Rain briefly delayed the start and then a couple of showers during the afternoon reminded all that we are in winter conditions.  We still managed to complete all three games and finish in plenty of time, well before the chill of late afternoon arrived.

The sun shone on two 3 winning teams.  Taking out the top spot were Leon Wech and Barry Butcher (who played really well today). Together with their 3 wins they won 13 ends and had 26 points. 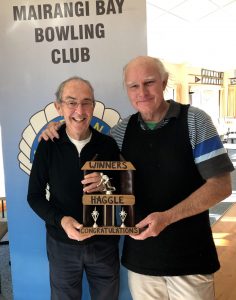 In second place were Geoff Ladd and Les Boulton with 3 wins, 13 ends and 22 points.  With two and a half wins, in third place, were Alan Daniels and Glenda Rountree.  In fourth were Ron Horne and Pam O’Connor with 2 wins, 13 ends and 26 points, the same number of wins, ends and points as Tony James and Gerd Hutcheson who were relegated to fifth as they had more points against than the fourth place team. In the spirit of the Saturday pm Haggle, the prizes were spread around with an extra draw for the lucky dip team, this week won by Sandra Coombe and Mike Wilkinson.  They were contacted at the the last minute and agreed to play, which meant that we had a full filed and no byes, so thanks to them for playing and it’s great that the lucky dip sun shone on you.