After a delay of 3 years, thanks to rain and COVID we were finally able to hold our Village Invitation Tournament on Tuesday November 29. We had a great response with 26 teams coming from 12 Villages, with 6 Mairangi teams taking the total number of entries to 32. It was unfortunate that our second grass green is still not available for play but each team got to play at least one game on Mayfair green. It meant a bit of toing and froing but everyone coped and thoroughly enjoyed their day.

Unable to get a slot in their village teams Tony & Jane James asked if they could play in a Mairangi team. Teamed up with Margaret O’Carroll they became our wild card team being both a village and Mairangi team. They combined extremely well and won the day with 3 wins, 14 ends and 32 points. 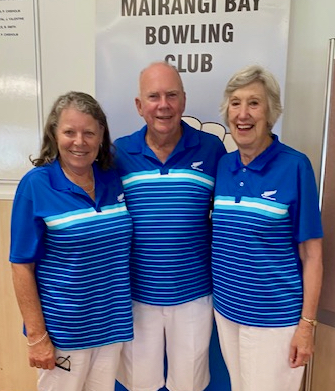 Second was a team from Settlers, Peter Reg & Betty also with 3 wins,  but 12 ends and 24 points.   Coming in third place were Jan Gledhill, Lorna Donald and Graeme McGregor with 2 ½ wins narrowly beating a Poynton team skipped by Joy Watkinson with Terry Leighton and Don Whitely who also had 2 ½ wins but 1 less end.

Thank you to those club members who made themselves available to play, Many thanks to Noelene who organized endless cups of tea, to Tony James and Elwyn who stepped in to run the bar which did a roaring trade at the close of play, to Ron Rennie for running the raffle ( selling 200 tickets ) and assisting with sorting out the prize winners and to all our members who helped set up and tidy up. Without your help our tournaments would not run as successfully as they do.

We will run another invitation day next season.