The much-decorated Colin Rogan, playing as Mairangi Bay’s representative, took out the men’s champion of champion singles title with a 21-16 win in the final over Takapuna’s Graham Skellern.

The game had been even until at the midway state, Skellern had a shaky spell and though he rallied it was not enough against the trademark steadiness of Rogan, who now has a staggering 33 centre titles.

Both players showed excellent form in the qualifying rounds, with Skellern opening with a 21-0 whitewash and Rogan beating a strong player like Riverhead’s Steve Cox 21-8 in their semi-final. 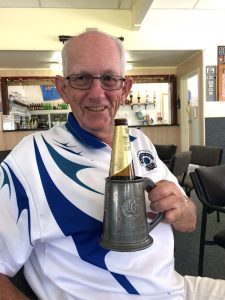