The final day of qualifying play was played on what was surely the hottest day of year so far. Winners on the day were Ruth Lynch with Ian & Trish Hardy, the only team to  have 4 wins. 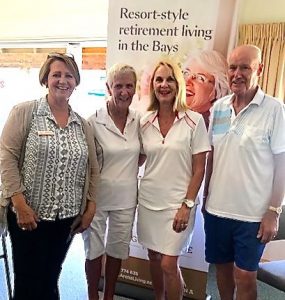 Many thanks to our sponsor, Arenea Living, and to Rowena Tinone for being available to tell us some news from Arena and to present the prizes.

In second place with 3 wins & 33 ends was the team of John & Caryl Miles with Bevyn Darlington. Close behind with 3 wins & 32 ends were Phill Chisholm, Stuart Jamieson & Jan Gledhill.

Remember teams on March 4 may have only 1 change to the team as listed above. If a team is unable to comply with this they will forfeit their place in the Final & the next best team will be promoted.

All other teams will play in a regular open tournament. Please tick your availability on the entry sheet