The Championship 1 – 5 Pairs started with a field of 8 teams, and so was played in a 3 game format with 2 & 3 winners proceeding to post section play.

The upset of the  second round saw Gaye/Joy lose to Joy/Graeme 19-4.

After the 3rd round, when all 8 teams had played, we had 5 teams with 2 wins.

Post section saw Allan/Flora defeat Michael/Glenda to go forward to the semi final where they played and beat Glyn/Rosemary 23-10.   The other semi saw Gaye/Joy beat Rick/Rick also the same score of 23-10.

The final played in deteriorating weather became rather one-sided after a fine display of lead bowls from Joy Watkinson which was enough to secure the win for Gaye Horne & Joy Watkinson 23-6 and to make them the 2021 1 – 5 Junior Pairs Any Combination champions.

A mention must be made for all those who played especially on Sat for the wind was about the worst we have had all year.
We had more complaints from the few spectators than the players. 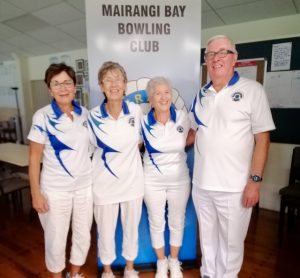