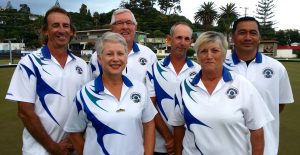 They won all three games, a fantastic effort.

Phil Chisholm had a slow start and was down early to some excellent bowls but then he found his mojo and got back to 7 all.  He then went ahead 14-11, 18-11  and finished at 21- 11 with some lovely bowling.

David and Colleen were behind early also, but after six ends they had edged ahead 7-5.  After 10 ends they up 14-5.  Colleen was leading exceptionally well although it was difficult to see from the sideline who was holding as both leads had the same coloured bowls.  David was coming in with some great bowls and they finished up winning 19-5 after 13 ends.

The triples had a very strong start with Theresa leading extremely well from the get-go and were leading 10-1 after 7 ends.  Allan Langley was putting his bowls in the right places although on consecutive ends when holding the shot he picked up the jack and trailed it to the opposition bowls.  He put that shot away however and they went on to win 18-4 after 14 ends.  Fata put in some great recovery bowls when the team was down.

Both the pairs and triples bowled exceptionally well as a team and gave the opposition few opportunities.

A big thank you to Louise Ball (twice) and Bob Mullen for filling at critical times during the round-robin play to keep the momentum going.

The team will go to Hikurangi on Sunday 5th of May to bring the Mercedes Cup back to Mairangi Bay.  They will play the winning teams from Auckland, Counties and Northland.  The way they played last Monday they will have a very good chance.

Men’s Junior Singles
Finally, the Men’s Junior singles is being held on Saturday/Sunday, March 23/24th.  Get your name down on the list on the board.

Also, the Junior Men’s and Women’s pairs is now an any combination Tournament Tand is to be held on Sunday 7th April, 4 games of 12 ends and 3 bowls.

Make up a team or put your name down, so we can make up some teams.

Good bowling to you all the season is flashing by, hopefully, the weather will hold.