A great result for Mairangi Bay and Bowls North Harbour on Saturday with our Junior Interclub team winning the Mercedes Cup up at Hikurangi. 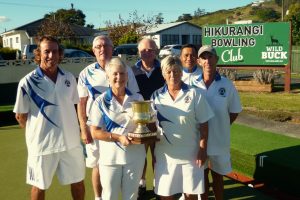 And also big thanks to the  Support team of Bruce and Helen Aley and Jean Ashby.

The Cup was won after round four, with Mairangi Bay unable to be caught, and that meant the final round was not played.

Phil Chisholm won 3 out of 3 games plus a bye. He beat the highly regarded Balmoral player in his first game.
David Payne and Colleen Rice had 3 wins and a loss, with a big win over the Manurewa team and had a loss to Balmoral.
Fata Letoa, Allan Langley and Theresa Rogers had 3 wins and a bye, They had a big win over a strong Balmoral team in their second game.

For Colleen and Theresa, this was their third and final attempt to win the cup so they are both thrilled in doing so.

Mairangi Bay last won the cup back in 2005.  The team then was made up of  Bruce Aley, Les Boulton, Roy Finlay, Con Kater, Des Lowe and Brian Rogers.  It was a Men’s team only as this was before the merger of the Men’s and Women’s clubs.

The team would like to acknowledge the efforts of Ian Hardy`s skills coaching of the past five years with assistance from Ian Coombe and Rex Redfern.

They would also like to thank Leon Wech for all his support and appreciate he gave up a centre event to be the team manager.