There were a couple of times that we had a mad scramble to find rain jackets, however play was not interrupted and it was fantastic to see such a talented and full field playing in our Open any combination pairs competition.

The wind did pick up as the day progressed, which made the conditions rather tricky on our fast running greens, however there were still two teams that managed to have four wins.

Congratulation to the winning team of Ian Hardy and Ruth Lynch in taking out top place with 4 Wins, 43 Ends and 87 Points 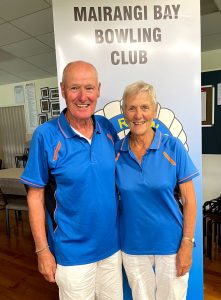