Despite the sea fog rolling in for most of the morning and into the early afternoon, the ideal conditions saw 20 teams competing for the three bowls, Open Pairs club day on Thursday 7th November.

Kevin Cameron and John Lindsay were the winning team with 4 wins, 37 ends and 61 points. 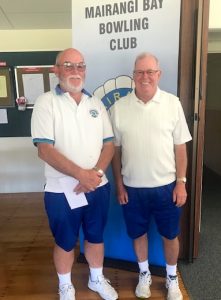 Also with 4 wins were George Durbridge and Kevin Sturgeon.  They won 33 ends and amassed a whopping 75 points.  In third place were Ian Coombe and Don Ambrose with three and a half wins.

There were many three winners, and with 35 ends won and 70 points, Ian Hardy and Phil Chisholm were the best of the three winners.

Congratulations to the winners and to all the participants.
Thanks also to David for yet another smoothly run event.