After days of heavy rain, the forecast for the day was accurate:  cold south westerly winds and occasional showers in the morning with the afternoon being mainly fine.  A beautiful winters day!!

Making the most of the conditions was the only team to manage 4 wins, being the team of Tony Popplewell, Jim Price and Bruce Aley. 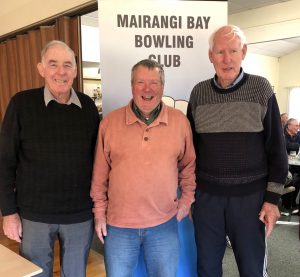 There were 6 teams with 3 wins and with a total of 5 prizes, two of these missed out and received the hard club collective “oh dear!!”

In second place, with 3 wins, 24 ends won and 42 points was the Evan, Anne Doreen and Graeme Doreen Team.  Taking out third place were Lionel, Ric Lydford and Theresa Rogers who had 3 wins 22 ends and 43 points.  Also on 3 wins with 22 ends, however 38 points, was the Ruth Lynch, Evan Taylor and Ian Hardy team, who therefore came fourth and in fifth place were George Durbridge, Alan Donnelly and Neville O’Connor (3 wins, 22 ends and 30 points.)