The Women’s Championship Singles event was held over the weekend of 26 /27 Jan. with ten women competing.  After several keenly contested matches on Saturday, Theresa Rogers, Colleen Rice, Sheryl Wellington and Jan Gledhill qualified for the playoffs on Sunday.  In the semifinals, Theresa beat Jan and Sheryl beat Colleen.

The final was won by Theresa Rogers 21/14 with Club President, Bruce Alley being the marker of the match.   So Theresa retained the trophy she won last year and will represent the Club in the North Harbour Centre Singles. 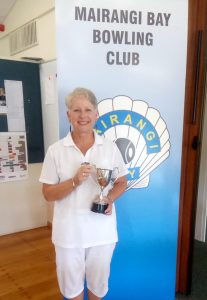