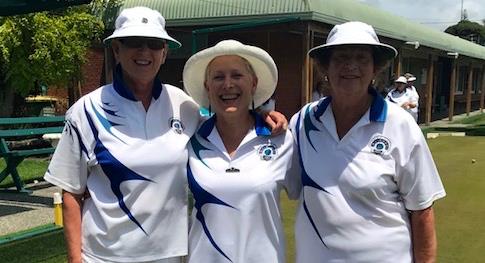 The Women’s Champ Triples (Fairclough Cup) was played over the weekend 20/21 January.
As there were only six teams it was played as a round-robin competition.

There were some very close games with only one or two shots on the last end deciding the winners from the losers but Hilary, Jan and Theresa continued their current good form by winning all five of their games and will now go on to represent the Club in the Champ of Champs on the 28/29 April.

They have recently won the Centre Triples, so, hopefully, they will make it a double!

It has been a very busy week.

The Handicap Pairs should have been played in October last year, but the weather does not always co-operate, so we had to reschedule it for Tuesday and Wednesday of this week.
We all know what Tuesday was like – rain!
Wednesday proved to be O.K. but as Mayfair and Knightsbridge greens had to be sprayed due to a fungus the first two qualifying gamed were played on the carpet green.  (who said that women were the weaker sex?).

The temperature for the first game was tolerable but the second was a different matter.   However, everyone survived (just), had lunch and the third game was played on Mayfair, thanks to Hamish allowing us to do so.

The semi-and finals are to be played on Tuesday 20 February.  9:30 a.m. Start.
This is a ‘reserve day’ in the club handbook.

I would like to thank the women for agreeing to play in not, exactly, ideal conditions, and Hamish for opening one green for us in the afternoon after the spray had dried.
Phyl.