There have been two club two competitions completed this last couple of weeks.

Six players competed in the above which was run as a ’round robin’ tournament and the winner was Theresa Rogers, who won all her five games, making her the outright winner, thus retaining the trophy which she won last year.   This is her last year as a junior.

As the programme is very full already, neither Colleen or Enid were overly interested in playing their remaining game to decide the runner up,  so there isn’t one!

The second competition to be completed was the

Eight teams competed and the four qualifiers were:

In the two semi finals Sheryl’s team beat Sandra’s quite comfortably.
The semi final between Raewyn’s team  and Jan’s was much closer 15 all going into the last end, with Raewyn’s winning the last end by two shots.
The Final between  Sheryl’s team (who had played great bowls throughout the competition) was much more clear cut, 28/5 to Sheryl.   They will thus go on to represent the Club in the Champ of Champs on 18/19 May. 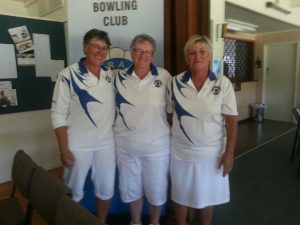