It was the case of a game of two greens (rather than a game of two halves) and some unusual results. On Mayfair there was one team that had four wins and on Knightbridge there were 4 four winners.  An interesting drawing of the cards on Knightsbridge as (obviously) none of the four winners played each other.

So five 4 winners and four prizes.  However our ingenious David Pearse came up with the solution that enabled all of the four winners to receive a reward.  Well done David.

Let’s start with the four winning team of John Miles, Des Lowe and Roy Findlay who came in 5th place.  They received the am and pm prize money with their 4 Wins, 23 Ends and 39 Points.

Congratulation to the team of Leon Wech, Wayne Glogoski and Baz McCrystal for their 4 Wins, 30 Ends and 60 Points. 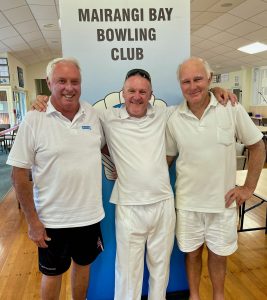